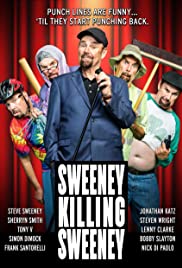 Aging local standup comic Sweeney, “The Character King”, gets an opportunity to do a national cable show out of Los Angeles. The only caveat is that Sweeney must drop the locally referenced material from his act, the biggest pieces being the portrayal of his colorful Boston “characters,” that have become a staple of his home field success. Sweeney makes the hard decision to stop doing the characters. But, to his dismay, the characters “come-to-life” and seek their revenge; they try to kill Sweeney.